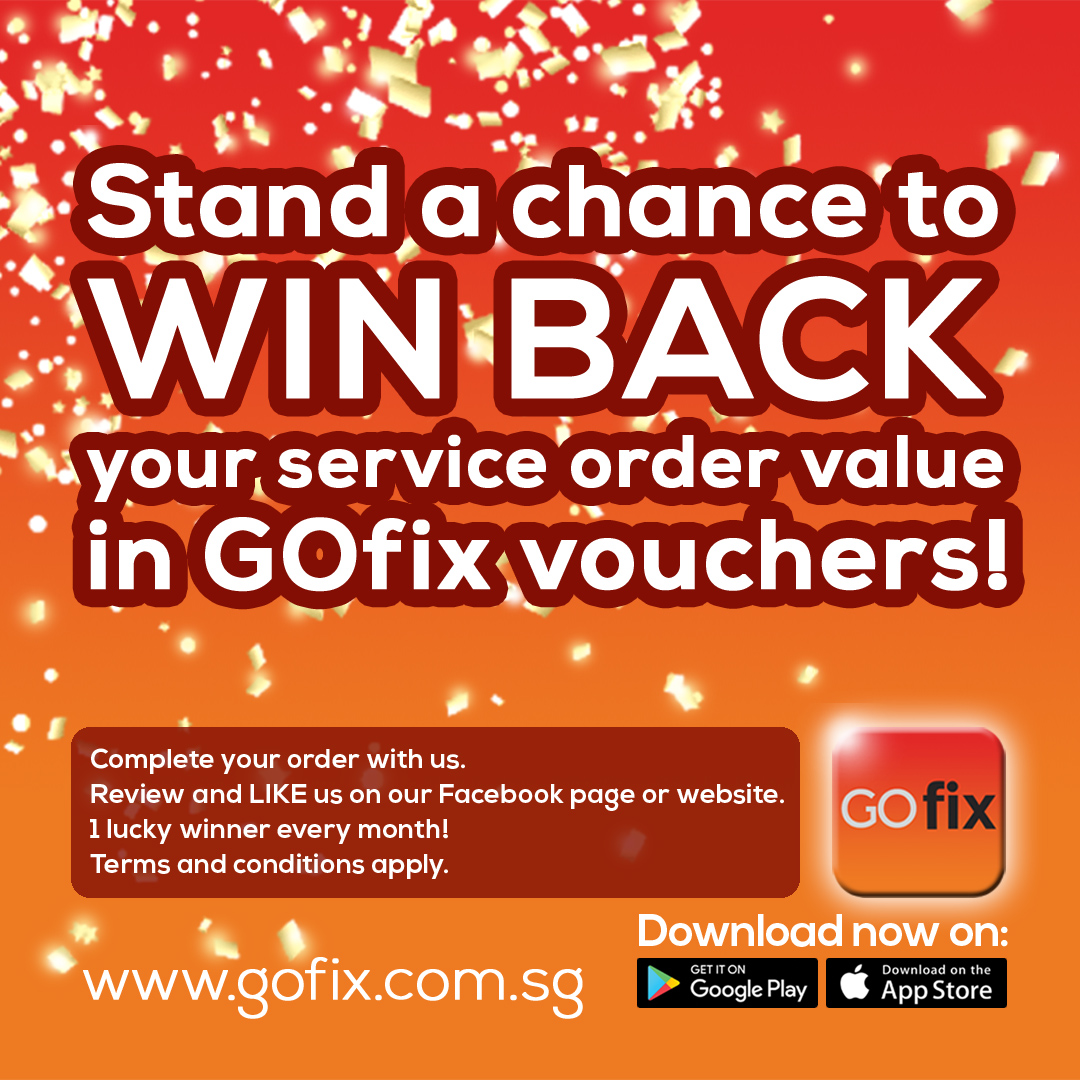 The “Win Back” contest is sponsored by GOfix (“Sponsor”)This contest is governed by these official rules (“Official Rules”). By participating in the contest, each entrant agrees to abide by these Official Rules, including all eligibility requirements, and understands that the results of the contest, as determined by Sponsor and its agents, are final in all respects. The contest is subject to Singapore law and regulation and is void where prohibited by law.

This promotion is in no way sponsored, endorsed or administered by, or associated with, Facebook. Any questions, comments or complaints regarding the promotion will be directed to Sponsor, not Facebook.

ELIGIBILITY
The Contest is open to legal residents who are eighteen (18) years of age or older at the time of entry, who have Internet access and a valid GOfix account. Sponsor reserves the right to verify the eligibility of each entrant.

CONTEST PERIOD
The contest will end on Thursday 31 December 2020, 1200hrs. (“Contest Period”). All entries (submissions) must be received on or before the time stated during that submission period. Sponsor reserves the right to extend or shorten the contest at their sole discretion.

HOW TO ENTER
You can enter the Contest by submiitting a review on a completed service order, through the Sponsor App or Facebook Page. Each entrant will receive one (1) entry into the drawing.

WINNER SELECTION
A winner will be chosen at random. The winner will be announced monthly. Announcement and instructions for prize redemption will be sent to the e-mail address supplied on the potential prize winner’s entry. Each entrant is responsible for monitoring his/her e-mail account for prize notification and receipt or other communications related to this contest. If a potential prize winner cannot be reached by Administrator (or Sponsor) within fifteen (15) days, using the contact information provided at the time of entry, or if the prize is returned as undeliverable, that potential prize winner shall forfeit the prize. Upon the request of the Sponsor, the potential winner may be required to return an Affidavit of Eligibility, Release and Prize Acknowledgement Form. If a potential winner fails to comply with these official rules, that potential winner will be disqualified. Prizes may not be awarded if an insufficient number of eligible entries are received.

PRIZES
The value of your GOfix service order in GOfix promo codes, in denominations of $25, up to a maximum of 10 promocodes, with a total value of $250.  1 promo code will be issued for any remaining value below $25.  Promocodes issued have to be used in one transaction. Unused amounts remaining within the voucher are not transferable nor refundable. Terms and conditions may apply. Incidental expenses and all other costs and expenses which are not specifically listed as part of a prize in these Official Rules and which may be associated with the award, acceptance, receipt and use of all or any portion of the awarded prize are solely the responsibility of the respective prize winner.

ADDITIONAL LIMITATIONS
Prize is transferable. 1 promocode can only be redeemed per service order. No substitution or cash equivalent of prizes is permitted. Sponsor and its respective parent, affiliate and subsidiary companies, agents, and representatives are not responsible for any typographical or other errors in the offer or administration of the Contest, including, but not limited to, errors in any printing or posting or these Official Rules, the selection and announcement of any winner, or the distribution of any prize. Any attempt to damage the content or operation of this Contest is unlawful and subject to possible legal action by Sponsor. Sponsor reserves the right to terminate, suspend or amend the Contest, without notice, and for any reason, including, without limitation, if Sponsor determines that the Contest cannot be conducted as planned or should a virus, bug, tampering or unauthorized intervention, technical failure or other cause beyond Sponsor’s control corrupt the administration, security, fairness, integrity or proper play of the Contest. In the event any tampering or unauthorized intervention may have occurred, Sponsor reserves the right to void suspect entries at issue. Sponsor and its respective parent, affiliate and subsidiary companies, agents, and representatives, and any telephone network or service providers, are not responsible for incorrect or inaccurate transcription of entry information, or for any human error, technical malfunction, lost or delayed data transmission, omission, interruption, deletion, line failure or malfunction of any telephone network, computer equipment or software, the inability to access any website or online service or any other error, human or otherwise.

PUBLICITY
By participating, each entrant grants Sponsor permission to use his/her name, likeness or comments for publicity purposes without payment of additional consideration, except where prohibited by law.

CONTEST SPONSORS
This contest is sponsored by:
GOfix

Any questions regarding this Contest should be directed to support@gofix.com.sg